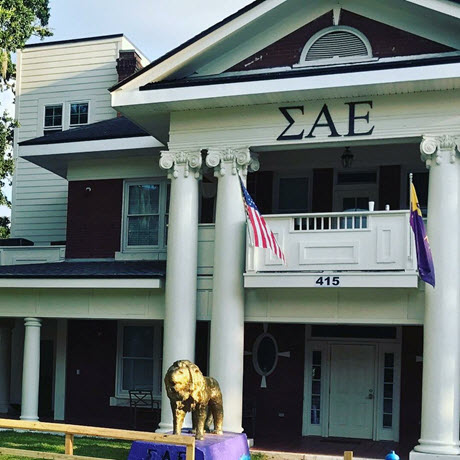 The Florida Beta chapter of SAE is happy to announce the Legacy Brick Walk at our new home located at 415 W. College Ave. The Legacy Brick Walk is designed to allow alumni to have their years at Florida State memorialized in a lasting manner. The Walk will be the path directly leading to the house from College Ave, right next to Leos new permanent resting location. The Walk will comprise of 390 individual 4 x 8 bricks, each having the engraved name of the sponsoring brother. The bricks will be very similar to the bricks located in front of the Westcott building but will be only for the alumni of Florida Beta. The bricks will be installed the week leading up to the Homecoming Game on October 20th against Wake Forest for the official unveiling that day. Any brother wishing to purchase such a brick will have until Sunday September 23th as we will need four weeks to have the bricks engraved, shipped and installed. The funds will be used to cut the overall debt associated with the house. There were considerable initial costs associated getting into the house as well as securing it for the first year. The house was not able to be fully occupied (only about 70% occupancy), resulting in a sizeable shortfall in rent each month for the first year. The chapter members paid extra dues each month, which was painful during the University imposed ban on all Greek events for a substantial portion of the school year. It was a very, very difficult year financially but the good news is that the ban has been lifted and the house will be 100% occupied this year. The funds will also go towards the paying off the purchase of the commercial grade furniture in the chapter house. The alumni Housing Committee decided it was best to furnish the entire house for various reasons. Therefore, there is furniture for each room and suite within the house (done on a HELOC opened against the house). For those who have not had the chance to tour the house, it is comprised of 15 suites, each including 4 bedrooms. There is also a presidents suite and three other bedrooms for a total of 64 rooms. Each room is fully furnished for a total of 64 beds (including mattresses/box springs), 128 chest drawers, 16 sofas, 16 living room tables and 48 bar stools. This is a significant amount of furniture and was purchased to be indestructible as well as to prevent the disruptive process of moving in and out a hodge-podge of random furniture, or worse, the building of bedrooms from lumber, long nails and a hammer. While this was a tradition at 1840 W. Tennessee St, this wear and tear painfully was reflected in the overall appearance of that house. We are asking for those wishing to sponsor a brick for a donation starting at $250. This is a great opportunity to support the fraternity and leave your own tradition at Florida Beta forever. If you have any questions please contact any member of the Legacy Brick Walk Committee including: Chase Dickson JR Long Tom Harrison Cobb Harbeson Skip McDonald Alex Grohmann Thank you, and Phi Alpha, Charles Boudet, EDA External , Fl Beta 407-375-5582 charlieboudet@gmail.com "