Last summer, Kelsie Eddington VFW Post 8923 lobbied the Carrollton City Council to approve the creation of a Veterans Memorial in the City of Carrollton. On 14 November, our dream became real as we dedicated a portion of McInnis Park Complex as Veterans Park Soccer Fields. After the dedication of the Park, we renamed the street going into the fields as Veterans Way. The traffic circle at the center of the parking lot for the soccer fields has been given to us to build a Veterans Memorial and we have started raising funds for that beginning in the second quarter of 2016. Our local Post 8923 is designated as a 501c19, Charitable Organization, and any funds received for the Carrollton Veterans Memorial will be deposited directly in the Carrollton Veterans Memorial Bank Account. We have obtained EIN number 81-0765533 and since obtaining the 501c3 designation is both lengthy and costly we have decided to use The VFW Foundation, a 501c3 entity, which will pass through funds marked for VFW Post 8923 directly to us.

In the meantime, we also named 3 of the soccer fields in memory of the 3 Carrollton KIAs: PFC Michael Edward Angerstein USMC, Vietnam; CPL Nathaniel Aaron Aguirre USA, Iraq; SSG Carlos Alonzo Benitez USA, Afghanistan. These 3 heroes names and pictures are now on permanent monuments at each field. There were over 250 people attending the ceremonies surrounding these dedications including representatives of US Congressman, our State Representative and the Carrollton City Council. Also attending were the 91 year old mother of Michael Angerstein, the parents of Nathaniel Aguirre and the parents, widow and son of Carlos Benitez and many other friends and families of the three. A reception for the families was held afterwards at the Plaza Theater in Old Downtown Carrollton.

The Veterans Memorial will center on a raised pentagonal center structure which will include a flag pole in the center of a reflecting pool. Each side of the structure will have brass plaques denoting the 5 branches of our armed services. A ground level star point will emit from each side of the center structure to be filled in with etched 4 x 8 bricks in honor of individuals, friends, and family members who have served. The bricks will be laid under the symbol of the branch they served with. A separate donor wall with 8 x 8 etched bricks will also be included as plans are finalized. Plans are also included for a stage area for multi-use and a flag retirement pit area to be built by the Boy Scouts. 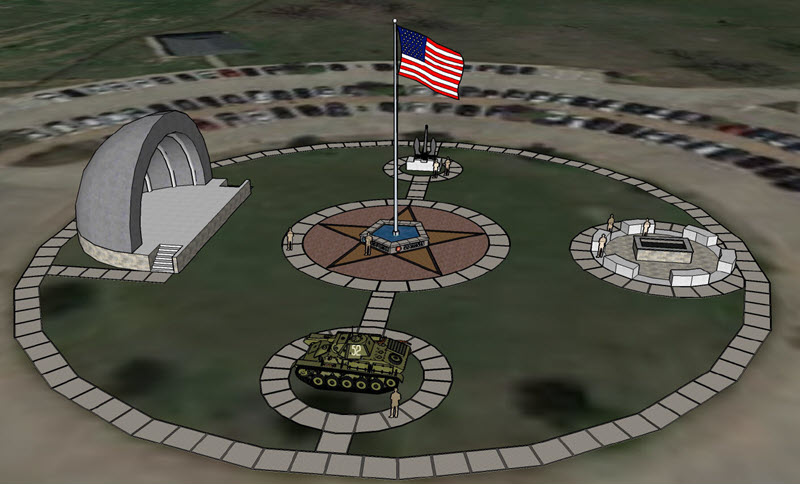