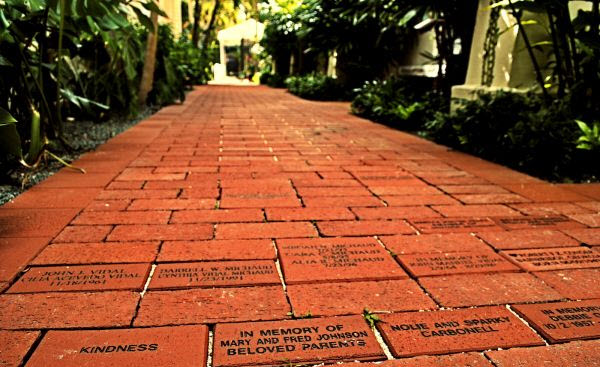 WOMEN'S TRANSITION HOME CURRENT PROJECT: Transition Housing for Female Veterans in Lake County DONATE TODAY!
Give the Gift that leaves a memory for friends, family and loved ones.
Honor their service to our great nation in the Military, First Responders, Medical Heros, Firefighters, Police Officers, or just because you love them.

These bricks will form the base of the Flag Pole. The majority of the bricks will be used to create a pathway from the house to the reflection garden; this will serve as a visual reminder of the love and support that Ashley's House was built on.

Villagers for Veterans, INC is a nonprofit 501 (c) (3) that raises funds to assist our veterans, many permanently injured, as they adjust to civilian life. We have accomplished much but there is still so much left to do. Many of our veterans find it extremely difficult to transition from military to civilian life. They miss the camaraderie and structure of military life and often find themselves facing severe financial hardship and frequent bouts of PTSD. Homelessness is a constant threat; that easily could lead to depression and suicide. Although there are established transition programs provided by the military, those programs are predominately geared towards men. Female veterans find themselves isolated, with fewer options than their male counterparts and face challenges that are unique to women. According to a study performed by HUD and the VA, female veterans are more likely to be homeless than their male counterparts. They are also four times more likely to be homeless than their non-veteran sisters. The Department of Labor, Womens Bureau, found in female veterans listening sessions that "sex-segregated residential centers staffed by qualified individuals who are sensitive to the needs of female veteran culture was a top priority. Many of these women have faced domestic abuse and military sexual trauma. Living in a co-ed transition housing facility promoted by the military is not a safe option. In one documented case, a woman who experienced sexual trauma was housed in the same facility as a male sexual offender. We want to help these women. Villagers for Veterans next major objective is to procure and then remodel a Lake County property into a transition home  a home that will provide a temporary safe haven for eight deserving women vets. Job training, counseling and much needed female camaraderie will be provided as they work towards self-sufficiency in a secure and loving environment. We are confident our Lake County community and others in our region will embrace this endeavor and be a part of this, our first Memorial Brick fundraiser for a Lake County transition home for female veterans. This home will be named after Lt. Ashley White Stumpf. A book was written on her journey Ashleys War: The Courageous Story of Women on the Battlefield. Ashley was killed in Afghanistan in 2011. Thank you in advance for your support.

FOR ALL 4X8 BRICKS WITH LOGOS, PLEASE CHOOSE LOGO FIRST BEFORE TYPING TEXT- WE ONLY OFFER 3 LINES AND 18 CHARACTERS PER LINE. Marie Bogdonoff, Founder and CEO Villagers for Veterans