Brick Fundraising for Nonprofits and Institutions

As a method of raising money, brick fundraising for nonprofits is not a new concept.  In the last couple of decades alone, thousands of churches, schools and community organizations in the U.S.  have successfully raised funds by “selling” engraved bricks commonly utilized in recognition displays, such as walking paths and arches.  Detailed below are a few reasons why brick fundraisers are a great idea for institutions and nonprofits: 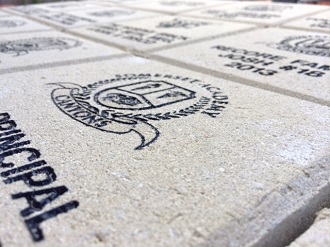 Engraved bricks are a creative means to recognize donors for many years past the initial fundraiser.

Most prospective donors want to support something specific and easy to understand.  For the most part, brick campaigns raise money for building projects or physical improvements, like the restoration of a historic park band stand, a new high school football stadium, or the expansion of a church social hall.  These clear fundraising requests, when paired with the purchase of an engraved brick, make brick fundraisers a win-win situation for both supporters and fundraising staff.

One big problem with many fundraising projects that support construction or remodeling projects is that donors don’t see any progress, which can cause new donations to grind to a halt.  Fortunately, this is not usually a problem for brick campaigns since:

A brick fundraiser is fairly easy for the organization’s fundraising staff to manage.  There are just a few elements that a fundraising committee needs to decide:

Brick fundraisers have been very successful in recent years.  A brick fundraising campaign can be even more lucrative when combined with modern methods of communication and online fundraising.

Are you ready to hold a brick fundraiser?  Contact Bricks R Us today for more information on this successful fundraising method.