Tips on Using a Fund-raising Thermometer for Non-profit 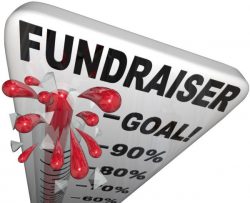 A fundraising thermometer is a visual representation of progress being made towards a specific fund-raising goal, with the thermometer temperature rising as donations are received in.  The reason that fund-raising thermometers are so important to your campaign, is that they provide a motivation for fund-raisers to achieve their ultimate goal, and they help track progress toward that goal.  It’s also true that people are more inclined to donate when they can see that definite progress is being made toward the goal, and they realize that they can be an important part of achieving that goal.

Why they are so effective

Fund-raising thermometers are effective because they provide clear and visible evidence of progress toward a fundraising goal, which means donors can actually see the results of their contributions.  When contributing money to some kind of cause which has no visual representation, donors might feel like their money simply went into a black hole, so they would then have no idea whether or not their contribution really mattered.

Most people also respond much more positively to visual representations than anything else, and a thermometer is a very easily understood depiction of how a fund-raising campaign is progressing.  There’s also a factor involved which plays on the success of achieving something, because most people like to participate in a project or campaign which is very successful.  A fund-raising thermometer is a great visual way of showing that kind of success to the world, and it creates instant appeal for some people who wish to be a part of the overall success of the campaign.

The first and probably the most important tip to remember about using a fund-raising thermometer is to plan your campaign out beforehand.  Make sure you know exactly what the goal of the fund-raising effort is, and start planning for the launch of your campaign.

You should have people involved who can create interesting and compelling content which will appeal to potential donors.  Plan various ways that people can be brought to your fund-raising thermometer, so they can see the visual progress in action, and can have a chance to be bitten by the success bug themselves.

Another important step toward making your fund-raising thermometer successful, is to make sure you have a great core group of supporters involved with your campaign.  For this, you can send out emails and make phone calls to previous volunteers, supporters, and friends, using campaign lists from the past.  If you can instill a high level of enthusiasm in this core group of supporters, they can then transmit that same kind of enthusiasm to potential donors, and create a greater chance of campaign success.

Once the campaign is underway, make sure your fund-raising thermometer receives maximum exposure on your website, in the news media, and possibly on social media as well.  When you do arrange for this kind of exposure, make sure that the thermometer itself is not depicted with any kind of harsh colors or fonts which make it hard to see or assimilate.  Be sure to include information on your thermometer about how everyone in the viewing audience can contribute, and how they can become part of the team success in achieving your fund-raising goal.