Tell Your Story with a Brick Campaign

Raising money with a brick campaign is often embraced by donors to solidify a special memory for themselves or loved ones. All of us want to be recognized and remembered, and brick campaigns allow donors to support their favorite organizations while telling their story to the public. 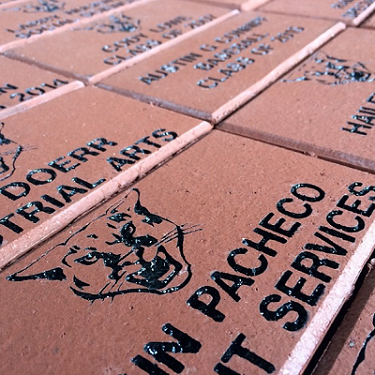 Some schools, such as Norco H.S., tell their story in a brick campaign by honoring graduating seniors.

Schools – Brick campaigns will suit both private and public schools. An engraved brick paver is even more special for high school seniors.  Graduating from high school is probably the biggest moment in their lives so far, so buying a senior class brick paver for the school grounds allows graduates to tell their high school story before moving on.

Museums – You can always find museums with a number of constituents to support a brick campaign.  These might include:

Faith-Based Institution – Most people have very strong, long-time connections with their church, mosque, temple or synagogue.  It’s where they were raised or where they raised their children. If your grandparents or great-grandparents were founding members of your church, you might want to create an engraved brick paver in their memory with the date of when they joined the church.

College and University – The majority of college graduates remember their university days with fondness.  Many alumni would be happy to purchase an engraved brick paver to permanently mark their days at their alma mater, including membership in a on-campus organization, fraternity, sorority, or sports team.

If you would like some more information about telling a story, contact Bricks R Us today!  Our friendly customer service staff is ready to answer all of your questions.