Get New Donors with a Flag Football Tournament

Youth sports leagues are an important element of childhood, as well as the fabric of your local community.  Unfortunately, these organizations are expensive to operate, requiring parents and players to spend time raising money each season.  To defray league operating costs, these groups need new sources of revenue and brand new donors.  Luckily, you can work on these tasks with a flag football tournament. 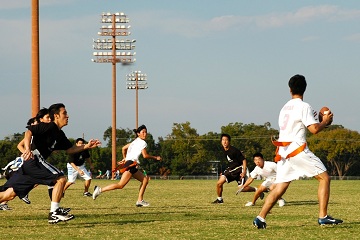 Draw more young adults into your next fundraiser with a competitive flag football tournament.

When organizing a fundraiser with youth sports leagues, clubs and fraternities on campus, or an entire neighborhood, one of the biggest challenges will be finding participants.  A team sport is a good choice because the team captain will recruit his own players.

In some communities, it might be easy to round up enough adults to form 10 or more flag football teams for a single tournament, but that’s probably not a common occurrence.  Organizing a fundraiser of this sort really requires a large pool of young adults.  Colleges and universities are great places to find teams for your sports fundraiser.

It’s common on American college campuses for fraternities, sororities and other housing/social units to compete against one another in a range of activities from best homecoming float to intramural sports to the “university sing.” Most of these groups have a budget for these types of activity, so there won’t be much arm twisting required.

Although securing participating teams is important, make sure you don’t forget these other elements of a flag football tournament:

If you have any questions about organizing a fundraiser or fundraising consultation, contact us today!